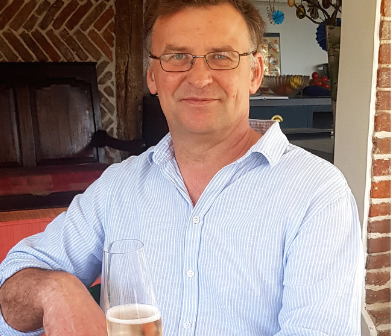 The Kent-based co-founder of English wine delivery service, Corkk, on why he set up the company

First things first, what are you drinking?

Heppington Vineyard, which is a relatively new vineyard here in Kent, their Pinot Gris because it’s one that’s just been introduced to us – whilst still young, it’s a lovely vibrant wine and will get better with age – they’ve done an excellent job.

Tell us about your wine journey – how did you come to start up Corkk?

We live in the middle of the countryside, between Canterbury and Ashford, and all around us vineyards are popping up. I’ve always been a wine enthusiast but didn’t really know anything about the wines on my doorstep.  So, I started going around, speaking to people and trying some of the local wines and discovered, to my delighted surprise, they were many different varieties, and most were very good indeed.

Many people in England and Wales have got a terrible pre-conception about English wine from 20 years ago, that it was over-priced and not very good and, unfortunately, that, for some, has lingered on. So, I thought, wouldn’t it be great to go on a journey of discovery and start to find out about all these fabulous different wines that we’re now producing?

But as an enthusiastic amateur, in reality I wasn’t the person to be able to pin-point where the good wines are so we work with Master of Wine, Clive Barlow. He has a shop, The Goods Shed in Canterbury, and he’s always had a selection of English wines and so I told him about my idea and asked him if he would be interested in helping me and he said he’d love to. It was as simple as that.

Clive goes out and selects just six wines each month because the whole idea is that we don’t want to be just another marketplace. We want to be somebody who carefully curates a really good selection of wine, which shows the true varietal nature of English wine and highlights some of the more quirky elements – whether that’s the Pet Nat from Westwell or the Orange Bacchus from Litmus – to showcase some of the up and coming vineyards and exposing some of the great wines that we have.

By having his expertise, we believe you’re going to get some really high-quality, distinctive and surprising wines, which are going to make the journey more fun.

What is so special about English wine and how can it justify the price-tag?

One of the great things about English wine is its uniqueness and the fact many come from smaller vineyards. I like to ask customers their opinion on the wines and one constant, apart from how good they are, is ‘you won’t find anything like it in the supermarket’ and that is because these wines are different, distinctive – they’re not mass-produced or bland.

Regards price, it is a difficult one as most wines bought in the UK are for under £10 and that has set an expectation. However, it is difficult for English wines to be priced as such. English vineyards are taxed heavily – for example , if a bottle was sold for £10, nearly £5 goes to the taxman – and most vineyards don’t have the economies of scale of the larger, overseas producers.

Rather like going to your local farm shop, where the produce will be more expensive but generally much tastier than the supermarket, this is about supporting your local vineyard. The owners, winemakers and growers are highly-skilled and passionate about what they do. They produce really good wines and because they are small and independent they can do some really creative stuff with wine, which makes it interesting.

These wines aren’t to be glugged – they are there to be savoured, they are to be thought about, there is a whole story about them. And that’s what we’re trying to do at Corkk, we’re trying to introduce consumers to some of the best examples of English wine and showcase how good they actually are.

How has the company grown since it launched?

We did a soft launch in December last year and decided to officially launch in March and then of course everything went into lockdown! But it’s not been the worst time to launch as people have been spending less on going out and treating themselves to better wines to have at home.

We’ve found that people may well know about the wines within a 25-mile circumference of where they live but are unlikely to be aware vineyards which are further afield. What’s been excellent about our journey so far is that we’ve had customers from Scotland, from Durham, from Cheshire and there’s not a vineyard for miles around but they’re buying into the concept of English wine, which is very encouraging.

Our vineyards have been hit hard by Coronavirus, particularly the smaller ones. They had no cellar door sales for a while, no on-trade. That was it, bang, nearly 90% of their normal routes to market gone so changing the perception of English wine is really important to help these guys sell their wines. It is definitely changing but it needs to change more and that is the challenge.

Anything exciting coming up that TSQ readers should watch out for?

We like the idea of people being able to try a selection of wines either from where they are from or from a part England that perhaps they have a connection with so we’ve done a Kent Box, working with Produced in Kent, and we’ve got a Sussex Box now. We’ve also done an Organic Sparkling Box as we’ve got some really good organic wines in the South East so we plan to do more themed boxes.

Due to the timing of our launch, we’ve been a bit stuck in a way. The only thing we’ve been able to do is the online sales and collaborations. But what we’d really like is to be out there [at events etc] getting people to taste the wines and eventually open up a retail outlet specialising in English wines.

Do you have a favourite wine region in England?

It has to be the South East. I love it. There are so many different wines and you get surprised and delighted all the time.  However, our journey is only just beginning so I am very excited about discovering many more wines from many other regions.

Which vineyards in the South East are really getting it right?

Simpsons. Their still wines are lovely – they started in Languedoc (they have a vineyard there) so they learnt a lot of their trade over there and then brought it over here to just south of Canterbury in Barnham. Oxney is another. I think their wines are delicious.

Any underdogs / ones to watch?

Westwell – they have their Pet Nat, which some people loved and some people hated but I really liked it. A light, refreshing different wine and Adrian [Pike – the winemaker] is very creative like that. And then relative newcomers like Flint vineyard in Norfolk and Heppington Vineyard, who I think will do something really quite good.

Domaine Evremond [the vineyard being set up by Taittinger in Kent] – I know the farmer / winegrower there and there’s a spot that you drive up through the fields and you overlook the valley where they are planting the vines. It’s sun-kissed, beautiful and very private.

Favourite person to drink wine with?

Whenever a new bottle comes in to taste, I love to try it with my wife – there’s always that anticipation and excitement of just how good it will taste. Unfortunately, due to lockdown, I haven’t had many opportunities of drinking with Clive but it’s great drinking with him as he teaches me so much and it’s a real pleasure to drink with an expert

When we were trying it all out [sampling wines to sell on the website], we had some friends round and we popped open the Oxney Sparkling Rosé and it was the look on people’s faces – that shock and surprise of them thinking ‘oh my word this is good’.  We knew we were onto something special.

One client bought a load [of Oxney Sparkling Rosé] for his 50th – unfortunately it was just before lockdown hit so he couldn’t have his party – but he said: ‘well if I’m going to die, at least I’m going to die floating towards heaven on a cloud of pink bubbles’. Those moments make it worth it.

What wine has surprised you the most?

Simpsons Pinot Meunier because it was the first time I’d had a still Pinot Meunier – it had such a lovely, rich depth. And Litmus Orange Bacchus – I’ve never had anything quite like it and it’s stunningly good. Clive is raving about that one.

Because it’s summer, we’ve been having a lot of fish dishes, especially with the 2018 Oxney Chardonnay, which Matthew Jukes has described as the finest English still he’s ever had. But there are so many good combinations.

Finally, if you could only drink one wine for the rest of your life, what would that be?

I think I’m still too early in my journey of discovery to say!

How to spend Valentine’s Day at home