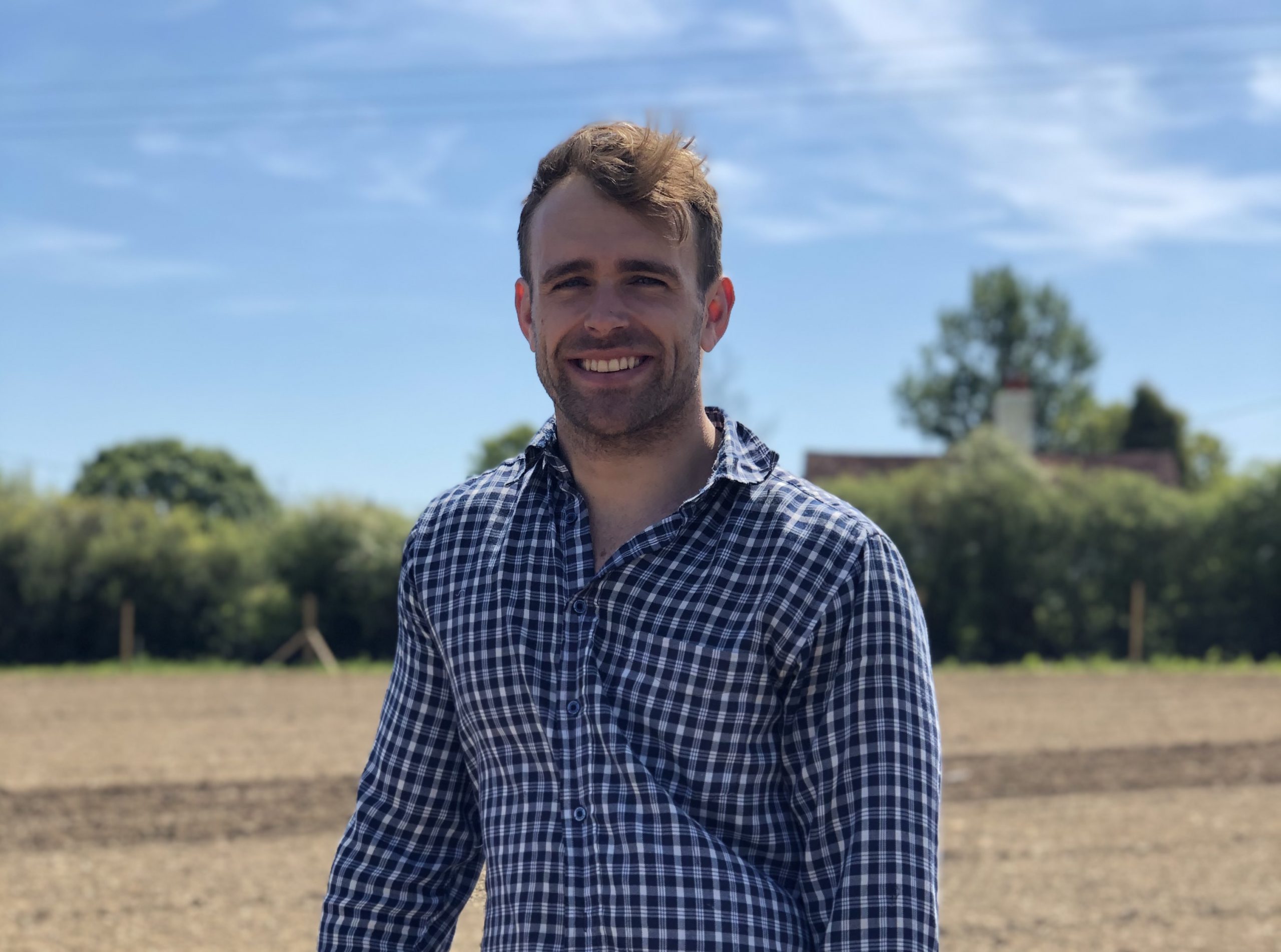 West Chiltington in Sussex is home to the world renowned Nyetimber and Nutbourne Vineyards and now there’s a new kid on the block looking to be a pioneer of English wines.

At 27 years old, Joe Beckett is the youngest vineyard owner in the country. Self-taught from a mixture of books, YouTube videos and courses at Plumpton College, as well as seeking advice from other vineyard owners, he has built Kinsbrook Vineyard ‘from the ground up’.

Joe’s approach to wine is utterly refreshing, there’s no snobbery involved – it’s all about the land, the hand-crafted produce and enabling as many people as possible to enjoy and experience his wines.

The vineyard has a true family ethos. There are four permanent staff tending to the vines and when it comes to harvest time family, friends and neighbours, who Joe describes as kinsfolk, get involved. Joe’s girlfriend, Becky, does the marketing for the brand and Joe himself does all the tours and tastings.

When we arrive he and his larger-than-life Swiss Mountain Dog Leon greet us with a smile and an offer of coffee before the tasting begins – it is only just 11am after all.

Joe explains that his vision for the vineyard came about shortly after he travelled to New Zealand in 2015 and toured the vineyards of Waiheke Island. Joe’s family have farmed land in Sussex for three generations and so he decided to create a vineyard on some of the land, which had traditionally been given over to maize and arable crops.

“My grandad moved to a farm called Kinswood in Brooks Green in 1969 [hence the name Kinsbrook] and my family have been farming in Sussex for many years. We’ve always wanted to diversify and have seen many pockets of land around Sussex become vineyards in the past 20 years so the thought had always been in the back of our minds but time was always an issue so it never happened,” Joe explains.

Eager to make the family dreams a reality, after finishing university Joe sought the advice of Dermot Sugrue, winemaker at nearby Wiston Estate, on how to get into the wine industry. They began work on a négociant sparkling wine using grapes from a Hampshire vineyard’s 2014 harvest, before Joe headed off to New Zealand to ‘play rugby and research’.

Joe adds: “I spent a lot of time scoping out how they do vineyards there and what I saw was the tourism – they were building platforms on the mountains for weddings, restaurants, wine shops and I came back and realised there was far much more to it all than just the wine and having a product to sell.”

After convincing family to give over some land for a vineyard, he planted 19,500 vines at Brooks Green in May 2017. The first harvest took place in September and October 2019, and in early summer this year, Kinsbrook unveiled its inaugural still vegan wines – a Bacchus and a Pinot Gris.

A sparkling rose from that harvest will be ready in 2022, along with a Vintage Cuvee in 2023 but in the meantime, Kinsbrook has launched its négociant vintage cuvee 2014, made with winemaker Dermot Sugrue.

Since 2017 Joe and his small team have planted two more vineyards at Picketty Corner in West Chiltington – Kinsbrook’s main site – with a further 20 to 30 acres available for expansion.

“We’ve planned to go into a lot more still varieties as we have a lot of sparkling set now,” he says. “We’ve planted four varieties as a bit of a test, the forgotten varieties that were used in Champagne hundreds of years ago: Pinot Blanc and Pinot Gris, which most people will know of but also Arbane, Petit Meslier. I really like the idea that we have the chance in England to experiment a bit and learn our niches and find our points of differences.”

Picketty Corner is where you will find Kinsbrook’s Horsebox Café, which they converted themselves and is open every day serving tea, coffee and homemade light bites, as well as their wines, although Joe has much bigger plans.

“I don’t just want it to be about the wine, I want this to be a destination,” he says. “We have plans for a fine foods shop to open next autumn with a deli, a baker, a butchery counter and a café upstairs – not everyone drinks wine but that doesn’t mean they can’t appreciate looking out over a beautiful vineyard in Sussex.”

Further plans for an onsite winery (at the moment they use the services of Simon Woodhead at Stopham Vineyard for their still wines) and lodges could very well soon make Kinsbrook a destination for wine lovers all over the world.

5 of the best supermarket English wines for Easter

Staycation 2021: Spend the night at this Sussex vineyard ‘Hobbit House’